There are numerous Total Knee Arthroplasty systems in the market with each system having different sets of instrumentation and different techniques that accompany each set. There are several things that make the surgical technique of Axis Knee System unique.

Most systems use alignment guides that go into the femoral canal. Some have guides that also go into the tibial canal. Violating the canal can potentially lead to fat embolism or activation of coagulation or bleeding may occur in the reamed canal. The Axis Knee System technique does not violate the canal.

Total Knee Arthroplasty is not just about cutting bone. The more important part of the surgery is balancing the ligaments that hold the bones together. The Axis Knee System emphasizes this by performing this step ahead of bone cuts.

Once the knee ligaments are initially balanced, the bone cutting guides are positioned onto their respective surfaces. Most systems cut the femur, cut the tibia and then attempt to balance the two by making adjustments--either by releasing more ligamentous tissue or cutting more bone. Other systems will cut the tibia first and then the femur but still balance the knee by adjusting--either releasing ligaments or cutting more bone. The Axis Knee System relates the femur and the tibia BEFORE cutting bone so that there is less adjustment needed. All bone cuts are made in one position (unlike in the other systems where you have different knee position when cutting the femur and another position when cutting the tibia). This will conserve bone by removing only the required thickness. This will save time by balancing the bones even before making the cuts. 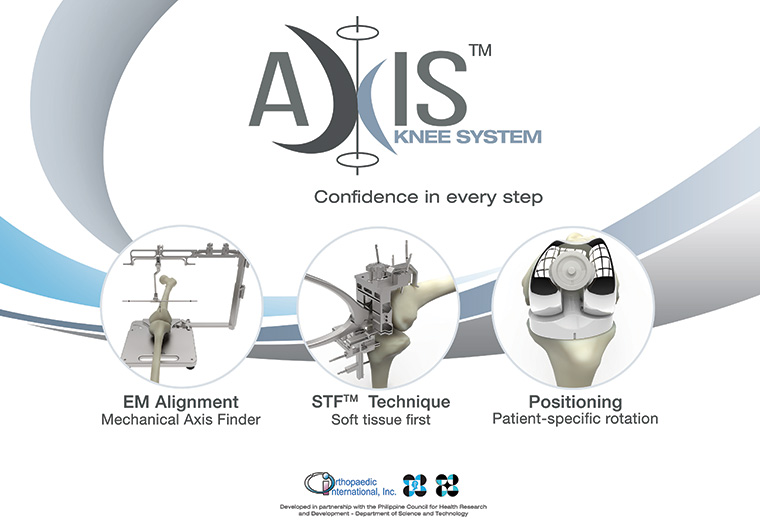